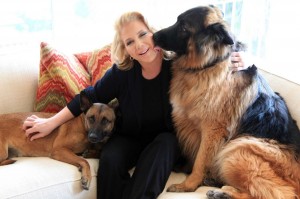 It was clear what had happened: Man and dog had been in pursuit of burglary suspects when the dog sped ahead. The highly trained canine cornered at least one of four young men, but a fifth came up from behind and choked the dog to death.

That December 2010, Schiller started learning as much as she could about police dogs and their officers. She hoped Dahlin’s dog, Blek, would be replaced swiftly, but she discovered that was highly unlikely. Dahlin would have to do desk duty until he himself could scrape up the  $15,000 it would take to replace his partner. And fundraising efforts tended to be low-wattage affairs – bake sales, barbecues and car washes.

Schiller, a lifelong volunteer, decided to wade in. In 2010, she started K9s4COPs, a non-profit group that helps law enforcement agencies here and across the country buy top-quality police dogs. Today, K9s4COPs has put more than 90 canines on the streets, and in 2013 Schiller started the initiative,  K9s4KIDs, which is helping to beef up security at school campuses across the nation.

Early on, Schiller and her husband, Oil and Gas Chairman, John Schiller, personally underwrote the program. Over time, however, generous Houstonians and law enforcement officers from across the country have opened their wallets, too.

Supporters want to strengthen the ties between communities and the men and women who work to keep them safe.

The dog, who doubles as a mascot and security guard, is 140 pounds and an expressive, gentle giant. At 41, Schiller still looks like the media personality and model she used to be. She’s been compared to both Marilyn Monroe and Lucille Ball. She looks like Monroe, acts like Ball and makes visitors feel as if they are a part of her high-society world.

She’s all business, however, when she’s talking about the important roles dogs play in police work.

Schiller grew up in Brazosport, where, she says, the road meets the Gulf of Mexico. Her family was in the offshore-boat business, and she ate raw oysters for after-school snacks.

After attending the University of Houston, Schiller took a job in an early version of entertainment TV.

The show, “Day and Date,” was canceled after 13 weeks, but Schiller couldn’t imagine failure when she arrived in the Big Apple to start work. Her maiden name was Hoss, and she introduced herself to everyone she met: “I’m Kristi Hoss, and I’m going to be famous in about a week.”

After a few months, she was back in Houston, working at radio station KL0L, 101 FM, where she dished out entertainment news and relationship advice starting at 5 a.m.

On the air she was known as “Lucy Lipps”  Her voice was her calling card of her funny, put you at ease, on-air persona. Schiller always had an interest in technology and social media, her reputation grew.

Forbes magazine named her “Queen of the Internet” in 1998.

“I loved it,” Schiller says. “And then I realized things were getting out of control. People knew me, and I didn’t know them.” You get somewhat paranoid when people approach you and you see the look in their eyes like they feel they have a connection because they listen to you every day.

“I moved to New Orleans.” She wanted to adventure to an unfamiliar territory, Schiller briefly worked as a stockbroker. “But that didn’t last,” she says.

In the matchmaking department, Schiller was surprisingly effective – she fixed up nine couples who actually got married. But she herself was single, rich in friends but poor in boyfriends. Then, when she was 29, a friend tried to fix her up. “Oh, honey,” she told him, “this isn’t going to work. I’m the matchmaker. I fix up other people”

Finally, however, Schiller agreed to meet the Oil and Gas wildcatter who would be her future husband. It was July 2001, a hurricane was brewing in the Gulf, and the French Quarter was a monsoon.

“John was completely wigged out at the rising water,” Schiller says. “I told him, ‘Don’t worry. I’ve lived through 150 hurricanes. We will be fine.”

The date only lasted an hour, but both were smitten. They met again the next week, and they’ve been together ever since.

Sinclair, their daughter, was born in 2006. She was 6 in 2012.the year of the Sandy Hook, Conn., school shooting That’s when Schiller decided to start K9s4KIDs, which she is hoping to expand along with K9s4COPs.

She is not opposed to guns – she’s a member of the National Rifle Association and has a license to carry. But, she says, she is a proponent of stricter gun laws. As well as, one protection dog is a better investment than a school full of armed teachers.

“Teachers are underpaid heroes,” Schiller says, “but they’re not in the business of reading, writing and Remingtons. When they were hired, nobody asked them, ‘How’s your aim?’ ”

Today hundreds of volunteers are involved in Schiller’s organization.

One is Bill Stanton, who describes himself as a private eye and former NYPD cop from the Bronx.

“Kristi reminds me of a modern-day Lucille Ball – she creates a tornado wherever she goes. But it’s a tornado for good, and her energy and enthusiasm are infectious. She has this Southern comforting, down-home-iness that people just love.”

“She may have a ditzy, blond persona in public, but she’s extremely intelligent, and she’s learned the dog business,” Thomas says. “People respect that.”

Early on, the sergeant says, Schiller gave his department five dogs. They were trainable but the equivalent of C students, he says. Later, Thomas took Schiller to a vendor in the mid-west and showed her where he prefers to buy police dogs. In the middle of the kennel tour, she grabbed him.

“I’m sorry, so sorry,” Schiller told him. “I just realized I went to the Dollar Store to buy the officers dogs, when I should be sending them to the Neiman Marcus of training.  These are the dogs that you need.”

To Thomas and the dozens of other lawmen and -women whom Schiller has helped, she’s a living, breathing superhero.

“Of course I’m not,” Schiller says. “The heroes are the men and ladies that are in uniform.”

K9s4COPs welcomes donations to help purchase and train dogs, provide instructions and certifications for canine handlers, and pay for dog food and veterinary care. For more information, call 936-825-9900 or go to K9s4COPs.org.